The most common question we hear from the Nanlite community is "Are you going to make a new app?" The answer is yes, and we're excited to announce that it's available today and it's incredibly powerful. The new NANLINK mobile app provides direct wireless control of the new PavoTube II X-Series LED tube lights, and in the near future it will be compatible with every Nanlite fixture that has built-in Bluetooth.

You can also control lights that have 2.4G with the new NANLINK app, such as the PavoTube 30C and 15C, the Forza 500 and others, you just need to also use the new NANLINK WS-TB-1 Transmitter Box, a compact and lightweight device with a 10-hour internal battery. The Transmitter Box can also be powered by AC or external powerbank batteries for longer shoots. The bottom line is that the new NANLINK app will provide deep wireless control of the vast majority of Nanlite fixtures.

The version of the NANLINK app for Apple iOS launches today. The version for Android can be downloaded here. A version for iPadOS is in development and will be launched in the near future.

What can the new NANLINK app do?

The new NANLINK app can pair with multiple PavoTube II X-Series lights directly through Bluetooth. Once paired, you can fully control CCT Mode, HSI Mode, G/M Shift, Effects Mode, Pixel Effects Mode, Presets, Quick On/Off, and Console Mode. You can fade the PavoTubes up and down with a tap, and set the fade time from 0 to 10 seconds. You can create scenes and group lights together, which gives you capabilities like the global control of dimming and syncing effects.

You can dig into all of the parameters of the effects, and all of the parameters of the other modes like CCT and HSI. If you create an effect or a look that you like, you can quickly save and name it as a recallable preset. The goal is to supply you with a truly powerful platform for adjusting multiple lights to your preference, with the ability to quickly to recall scenes, groups, and presets to optimize your productivity. It's an app that's intuitive for beginners, yet powerful enough to expand the creative options for professionals.

This is how the app works

When you first launch the NANLINK app, you are presented with a clean interface. To get things going, tap on the hamburger menu in the top left corner and then select + New Scene. Next, give the scene a name, such as "Wide Shot 2-Person Interview" and tap Create.

When you tap into your new scene, a + button appears so you can add lights. After tapping +, you are asked if you want to add a light through Bluetooth or 2.4G. The 2.4G option requires that you have the NANLINK Transmitter Box, but remember, the box makes it possible to control the PavoTube 30C and 15C, the Forza 500, 300, and 60, the MixPanel 150 and 60, and many more. You don't need to wait for a firmware update to control lights through the WS-TB-1, you can do it now.

When you have your fixtures paired with the NANLINK app, they will appear on the screen. When you tap into a light, you will see the controls of the current mode of the fixture.

You can use the faders to control the parameters, tap on the + or - buttons, and you can tap directly on the values (such as 30%, 3200K, or 0 in the image above) and type in your desired setting. Near the top right of the screen is an icon of a heart with a + on it. This is where you tap when you want to save a preset.

When you want to switch modes, tap the area of the screen where it says CCT MODE in the image above. A menu appears with the other mode options. Tapping on HSI MODE brings up this screen:

You can adjust the HSI by dragging or tapping your finger in the color wheel, but if you prefer faders you can tap the faders icon in the center. The camera icon accesses the camera on your mobile device; you can quickly snap a picture and select a color from the photo to instantly send to your PavoTube X.

To get a better idea of the depth of the parameter controls, let's take a look at the options in the new Driving pixel effect in the PavoTube II X-Series tube lights. This effect mimics the look of lights passing by outside a vehicle, making it easier to capture more realistic and engaging interior shots of your subjects inside cars. 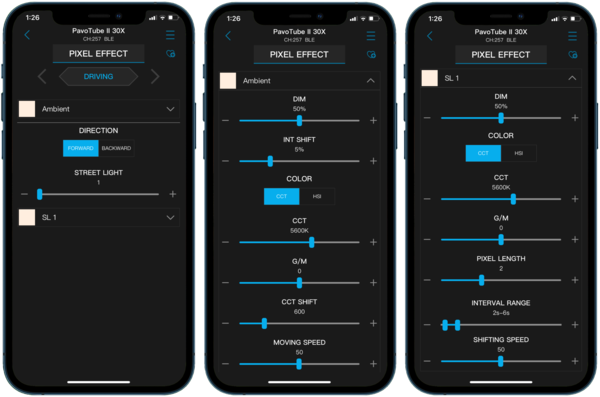 In the first screen on the right, you can see a control to change the direction the light is moving, and you can add up to 4 street lights to pass by. But you also have control of the ambient light outside the vehicle. Tapping on Ambient brings up some of the controls for that aspect of the pixel effect, which you can see in the center image above. You also have individual control over the 4 street lights. Tapping on SL 1 brings up some of the controls for that specific street light, which is in the right image above. When you're satisfied with the adjustments you made, you can always tap the heart icon to save them as a preset.

For a more dramatic effect, you can group several lights together and control their effects in unison, or intentionally stagger them. Attach four PavoTube II X fixtures to a Quad Bank Tube Holder and position it as needed. The same holds true for intricate effects like Driving or Process as it does for basic CCT and HSI Modes.

When you have numerous lights connected to the app and you're running multiple groups, Console Mode gives you a way to quickly control them all, without requiring you to drill down into the separate groups and individual lights. Console Mode is one of the many features that came directly from feedback from our community.

When you control a fixture like the Nanlite Forza 60 with WS-TB-1 Transmitter Box, the functionality of the light is increased. The Forza 60 comes with 4 built-in effects, but when you use it with the NANLINK app and the WS-TB-1 it's expanded to 11 effects. Plus, you get deep control of the many parameters of each effect with the ability to save presets. Using the Forza 60 with WS-TB-1 gives you the following effects: INT Loop, Pulse, Paparazzi, Candle/Fire, Fireworks, Explosion, Welding, Strom, TV, Flash, and Bad Bulb.

Another example is the Nanlite LumiPad 11. Normally, this fixture doesn't have any effects, but when used with the WS-TB-1 Transmitter Box and the NANLINK mobile app, it has 12 customizable effects with presets, and the ability to fade up or down to zero at a speed that you specify.

Anticipating that you will end up with a large number of custom presets, the NANLINK app includes advanced tools for sorting the contents of your app, so you can quickly find what you need and focus on storytelling.

The NANLINK System is the future of Nanlite

As you can see, this app has an impressive array of features and capabilities not only for our latest products, but for the majority of our fixtures. This is just the beginning. We will be continuously working on the NANLINK System to make it better and better. Keep an eye on the Learn section of Nanliteus.com for updates. There are many projects in the works!

Also be sure to check out the other big announcements from Nanlite: Introducing the Nanlite PavoTube II 15X, 30X & 60X LED Tube Lights and PavoTube X vs PavoTube C — What's the Difference?

Hopefully this information about the new NANLINK app has been helpful! If you have any questions, please contact us and we'll respond as soon as we can. Taking care of our customers is our top priority.