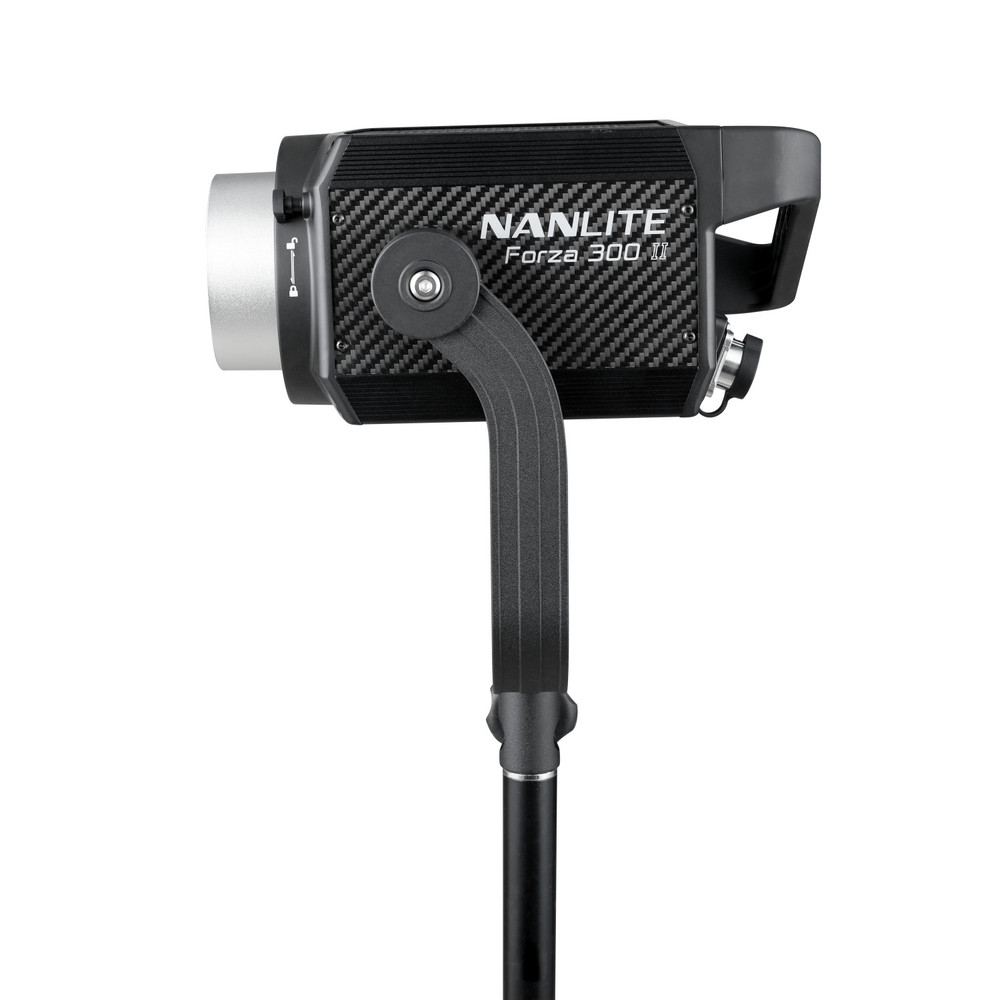 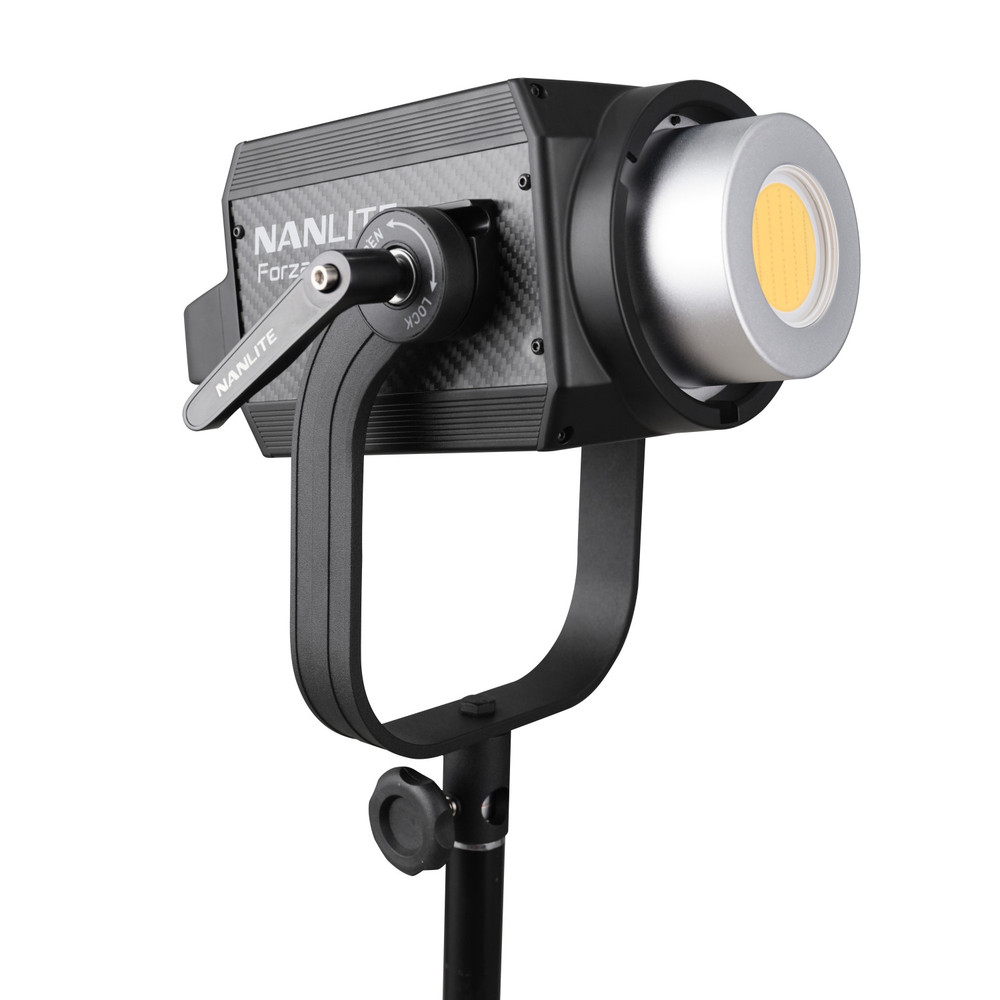 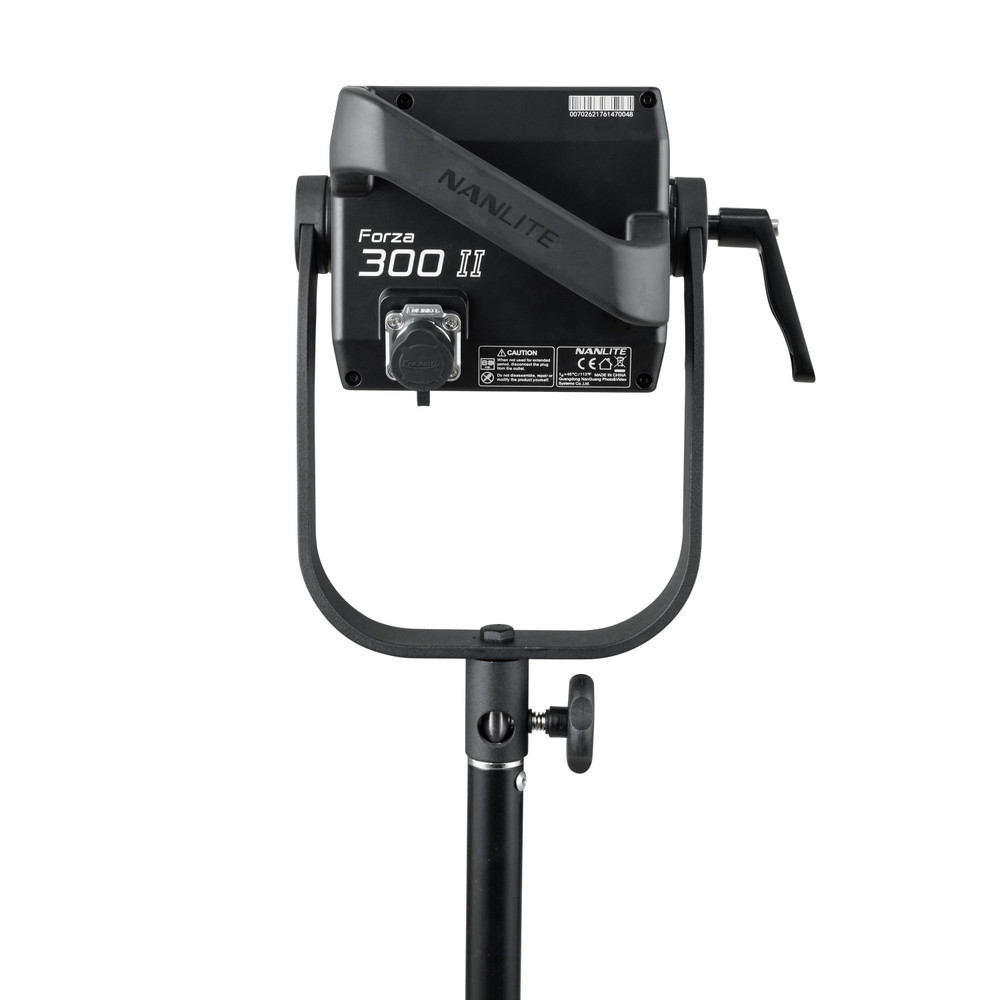 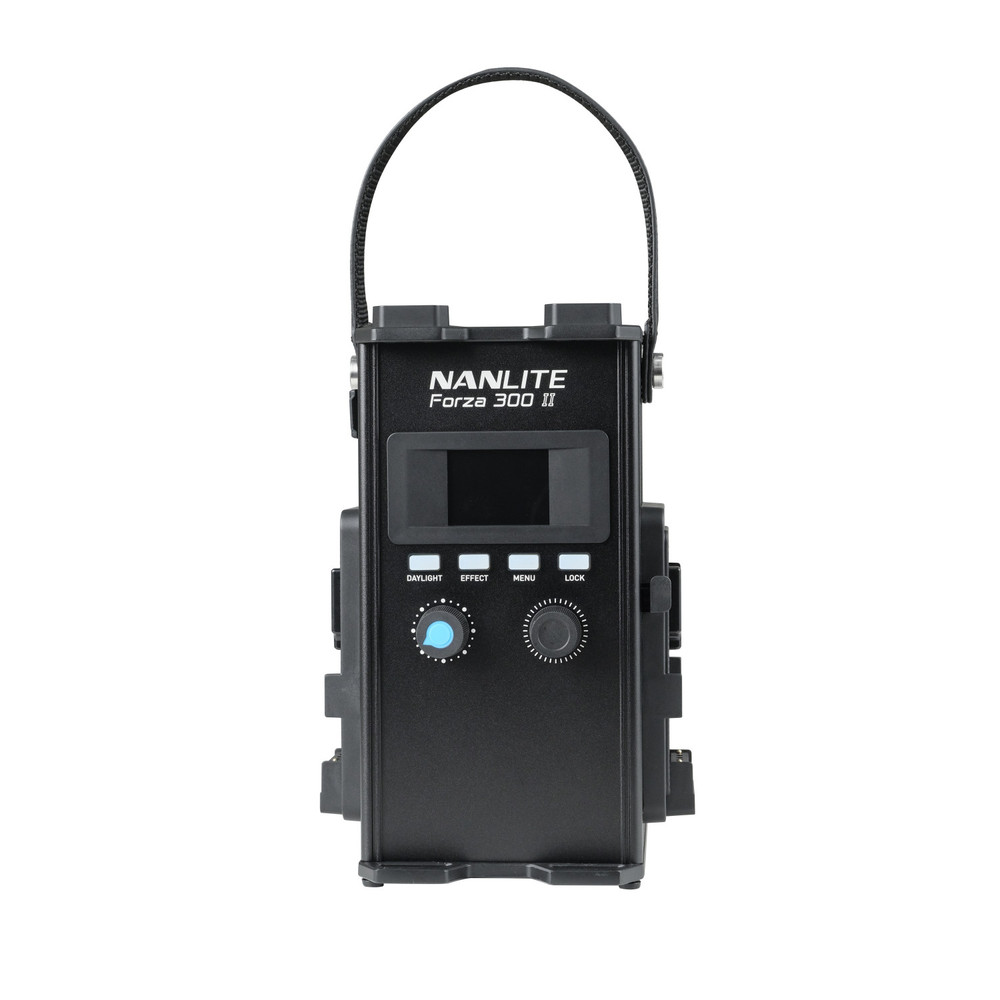 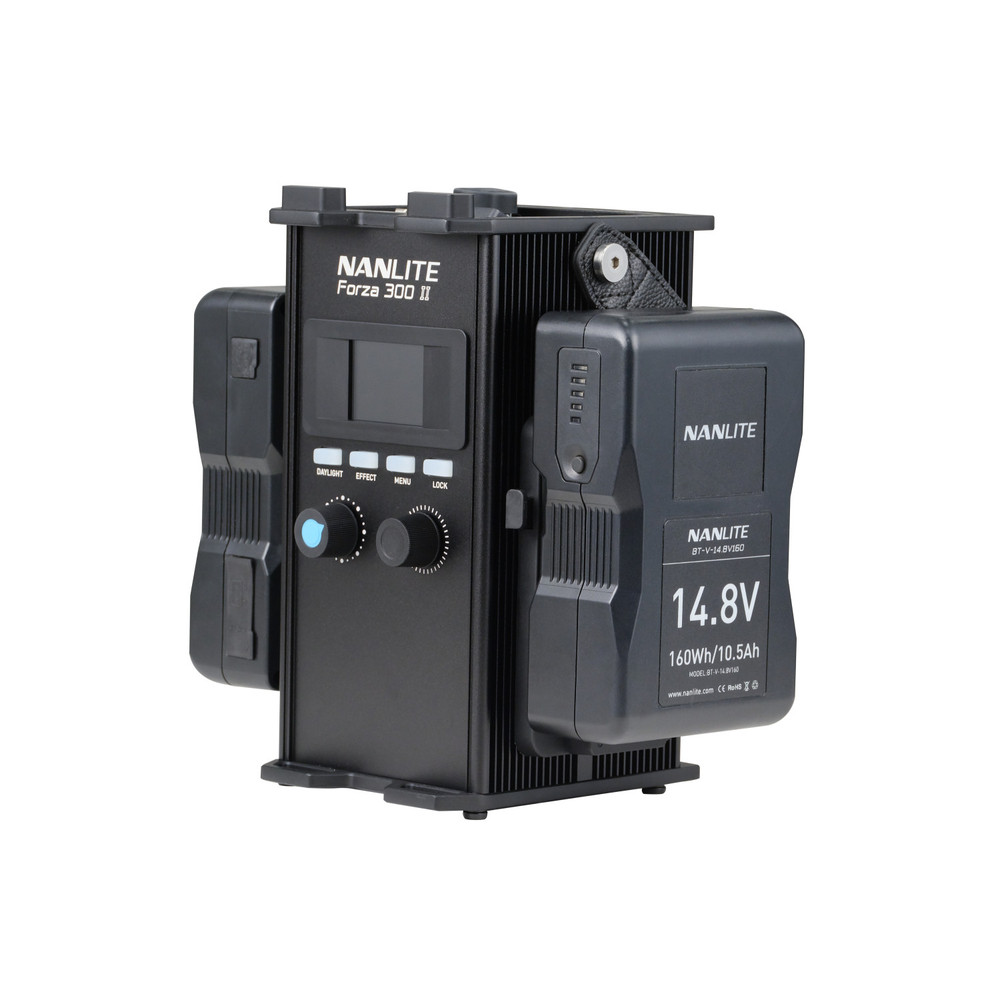 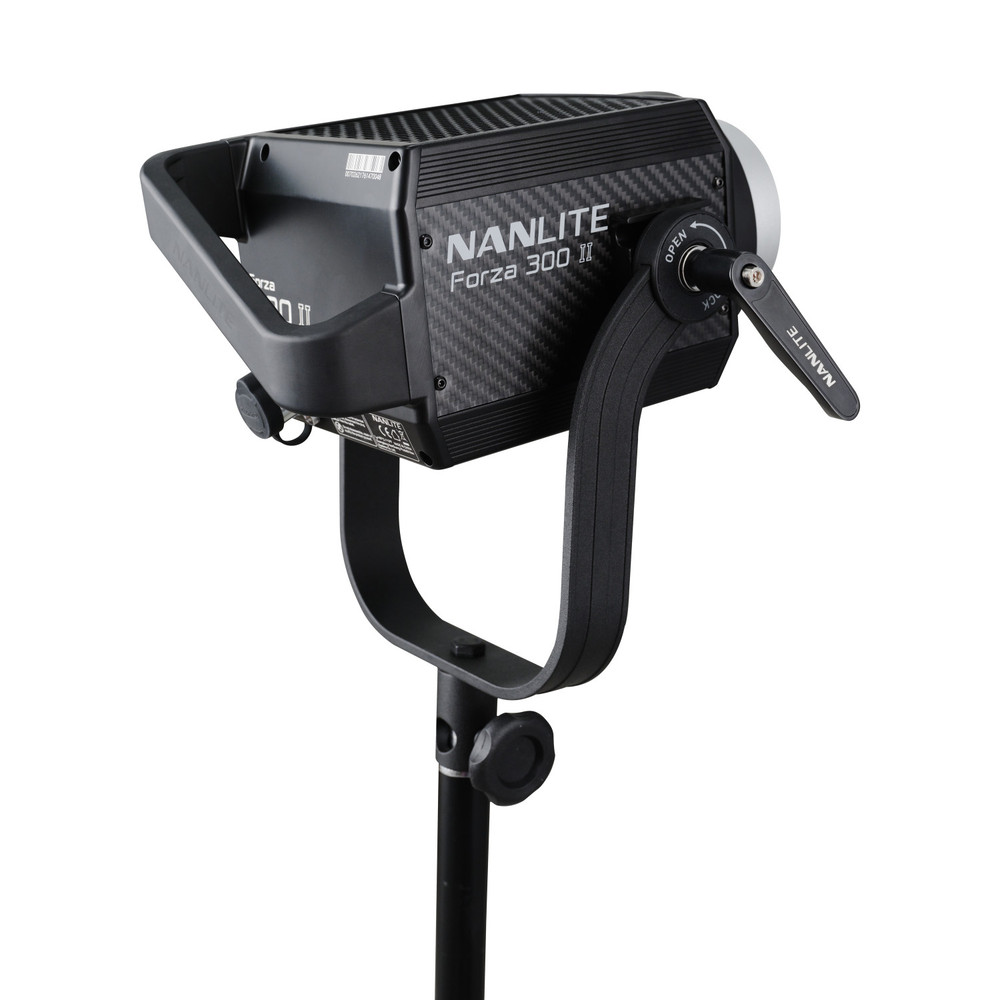 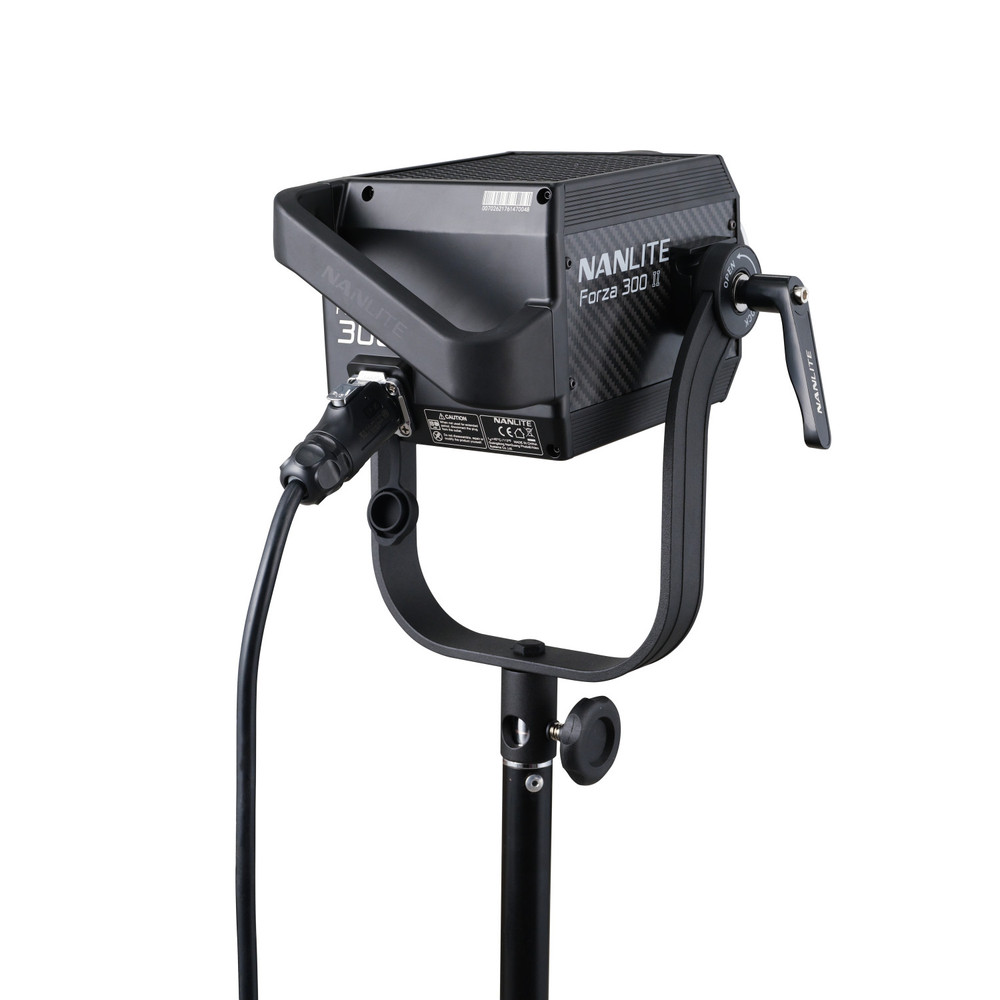 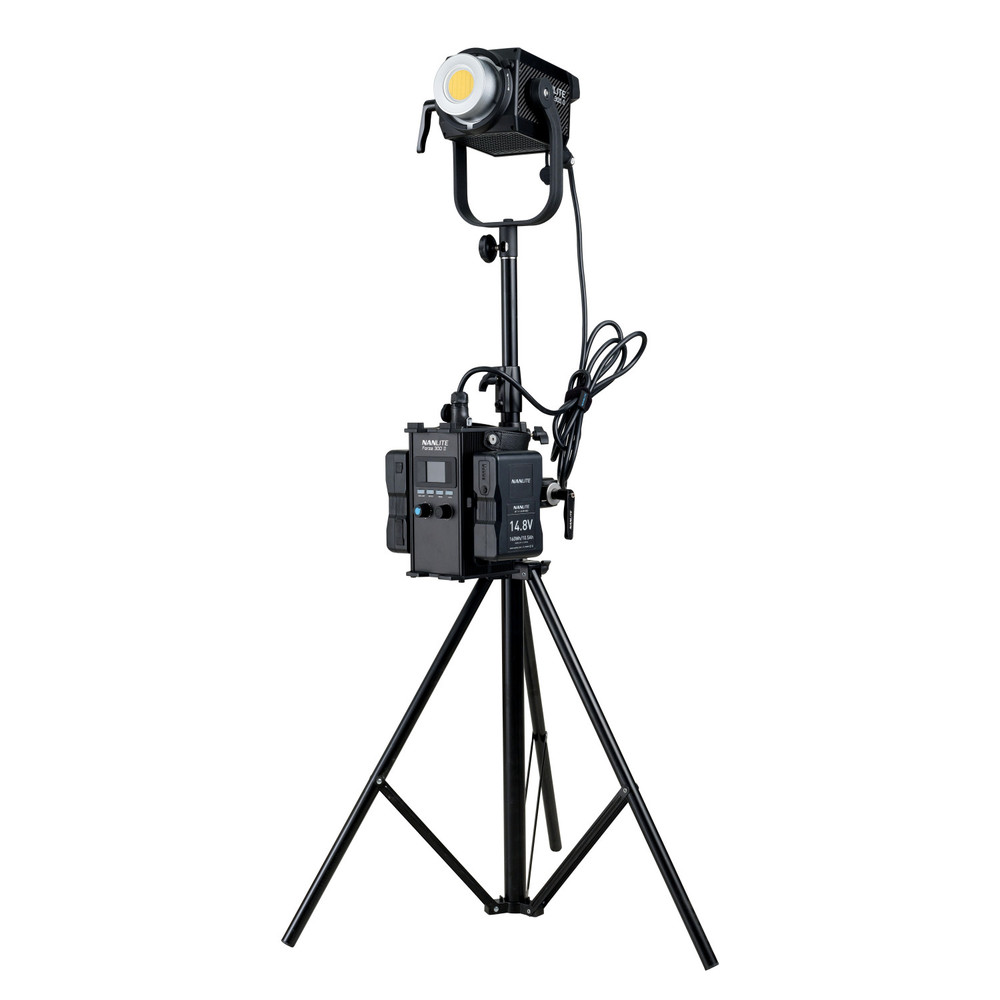 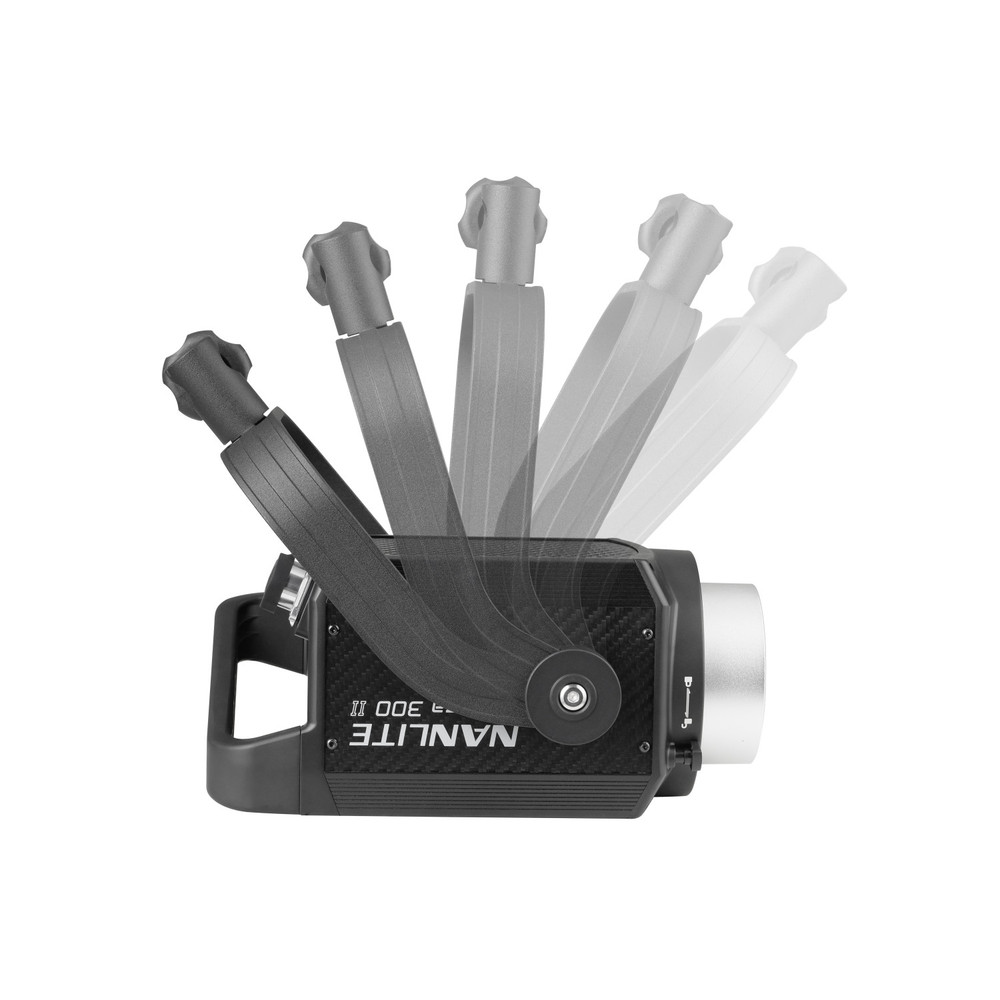 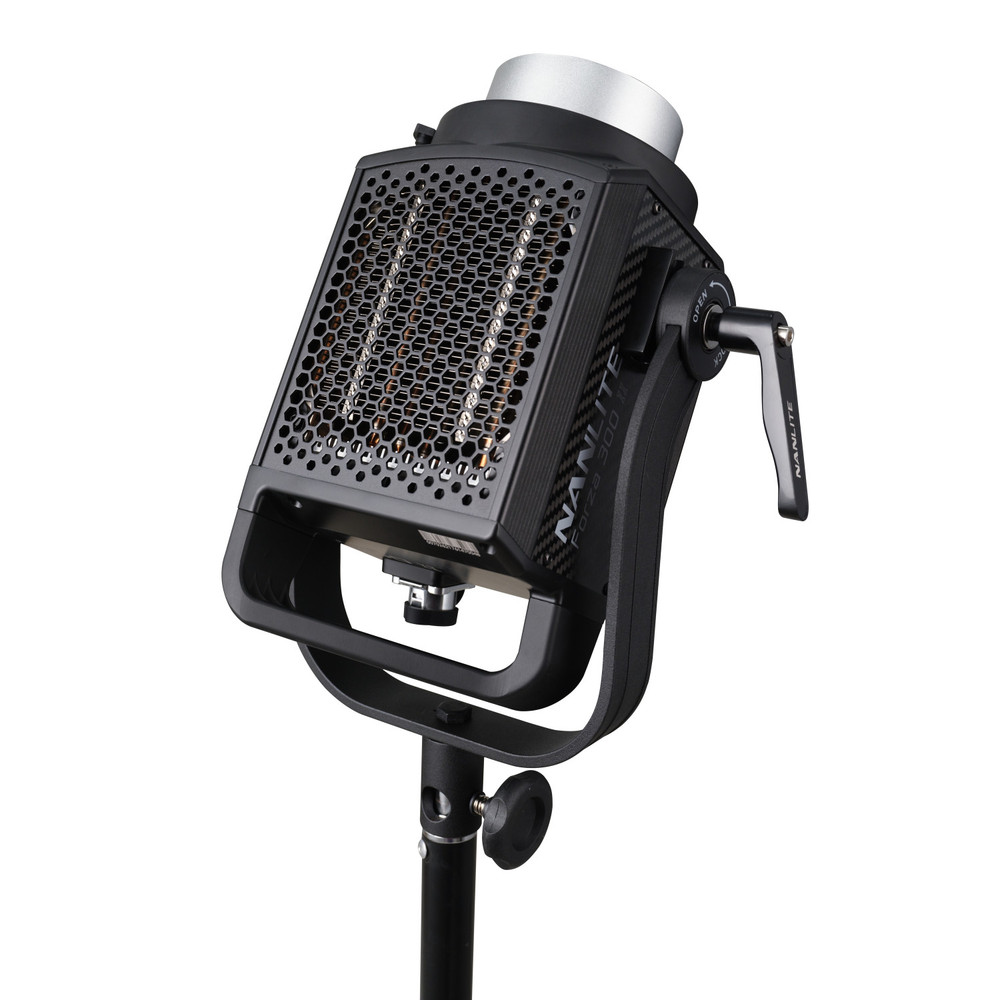 The Nanlite Forza 300 II LED Spotlight excels at being as compact and lightweight as possible—yet capable of delivering a truly impressive amount of output (69400 Lux, 6447.4 fc at 1 meter with included reflector). This is the second-generation of this fixture, and it's been improved in every regard. Forza 300 II was built for professional production with durable construction, control options for Bluetooth, 2.4G, and DMX/RDM, a protected glass-covered COB, and a fully redesigned yoke and Control Unit with the ability to efficiently run on AC or side-mounted V-Mount batteries (sold separately). You can have complete confidence in its performance as the 300 II has a highly accurate CRI rating of 96 and a TLCI of 97. It's also the world's first 300-watt 5600K spotlight with the ability to adjust the green-to-magenta shift by +/- 80, which is made possible by its W(RG) LED source.

The Control Unit is 37% smaller, fanless, can run on a single V-Mount battery, and gets 30% more battery life (batteries sold separately). The included cables are substantially longer: 19.8 feet (6 m) for the power cable, 9.8 feet (3 m) for the head cable, and considerably longer head cables are available separately. Forza 300 II is compatible with a vast number of Bowens Mount light modifiers, including Nanlite's own offerings. A useful 55° reflector is included, and there are numerous other modifiers available, such as the FL-20G Fresnel with metal barn doors (sold separately), which increases the output to 197000 Lux, 18301.9 fc at 1 meter.

The upgraded yoke allows 360° rotation and is curved to provide a greater tilting range with large modifiers. It features a stepless, one-sided lock for easy positioning, and an umbrella mount for more light-shaping options. The fan in the head is 9 dBA quieter than the previous generation and has 4 modes: Smart, Full Speed, Low Speed, and Off for absolute silence. A redesigned padded carrying case with improved cushioning safely holds everything. A USB port allows firmware updates which will add new features in the future, and it can supply power to wireless DMX receivers (sold separately) or other devices.

Compact Powerhouse
Forza instruments provide the highest quality of light while being as compact and lightweight as possible. Every aspect of their design is intentional, like the rectangular shape of the heads and Control Units, which can be stacked when setting up, breaking down, or storing. Forza 300 II provides an impressive amount of output from a head that weighs only 6.3 lbs (2.88 kg) and is a mere 12.9 x 8.9 x 4.8" in size.

Trust What You See
Nanlite users praise the beautiful quality of light our fixtures produce first and foremost. Light from the Forza 300 II doesn't just look good—it's accurate. With a CRI of 96 and a TLCI of 97, you won't waste time in post-production trying to fix color issues.

App and DMX Control
You can fully control Forza 300 II with your phone through Bluetooth with the free NANLINK app for iOS and Android. Built-in 2.4G lets you use the WS-RC-C2 Remote Control (sold separately) or the WS-TB-1 Transmitter Box (sold separately) for larger setups. Locking DMX/RDM in and out ports facilitate advanced control.

G/M Adjustment
In shooting situations where you need to mix light from the 300 II with ambient light, it can be extremely helpful to adjust the green-to-magenta shift to match the other light sources. This feature is also useful when you're trying to achieve a specific look and need to tweak the color to get there. It's uncommon for a 5600K fixture to have G/M adjustment, but you get it in the Forza 300 II.

Improvements All Around
The Control Unit has easy-to-access battery plates on the sides that accommodate various sized batteries. All cables attach to the top of the Control Unit so the flat base can rest on surfaces when in use. The included quick-release clamp is durably built, easy to operate, and works with round or square stands and trusses. It has an easy-to-read OLED screen, intuitive on-board controls and a Lock button to prevent unwanted changes to settings. There are 11 built-in effects that can be customized and saved as presets in the NANLINK app.

Decades of Focus
This is the second generation of this popular instrument with refinements and upgrades that make it better than ever. It's made by a company that's been focused on manufacturing LED lights for video production and photography for over 30 years, and all of this experience is evident in the Forza 300 II.